We tried to sleep in as long as we could, but we had a plane to catch and bags to pack. We had a delicious Indian breakfast that was similar to pancakes, and I felt lucky to have had an Indian experience staying with Shaleen, in addition to the Asian experience we were getting from Hong Kong. Shaleen’s family was extremely kind and let us do our laundry at the apartment and print out travel documents last minute at their office. It was another hard goodbye as Shaleen walked us to our bus stop and we promised to host him whenever he came to the States.

In typical backpacker fashion, we sprinted around the airport trying to return our Metro cards, grab some food, spend our last Hong Kong dollars, and find the proper Gate, all accomplished ten minutes after boarding time. I panicked and bought the first things I saw at the convenience store in the terminal: $13 worth of pistachios, 13 individually wrapped peanut m&m packs, Vaseline, cough drops, and Pocky. I bet they’re used to people making some bizarre purchases to get rid of currency. The plane was delayed by at least twenty minutes, meaning we rushed around for nothing.

Aside from the delay, Hong Kong Airlines was great and served hot tea, sausage buns and cozy blankets. After a smooth landing in Hanoi, we hopped in a taxi and showed the driver the Vietnamese address for our Airbnb accommodations. Driving on the main highway was no big deal, but as soon as we left the organization of the highway, we found ourselves in a fierce battle for the road amongst motorcycles, city buses, cars, and pedestrians. The white line dividing the road seemed to be more of a suggestion than a rule as scooters zipped in and out of lanes and buses drove entirely on the wrong side, honking their horn and threatening to plow over anything (or anyone) that got in their way. The scooters were only inches away from each other, with all sorts of crazy things attached to the back, like full orange trees, huge sheets of dry wall, or baskets full of live chickens. It was madness, but somehow it all worked out. Pedestrians crossed without being killed. Scooters made it to where they had to go. Thankfully, even our taxi dropped us off at the right address after a tight squeeze when another car came in the opposite direction.

After the taxi pulled away, we looked around at our surroundings. We were on a dirt road with a cesspool of garbage to our left and a crumbling abandoned building to our right. The garbage pile was a gravesite for cracked porcelain toilets, women’s shoes, and trash bags of filth. Were we really in the right neighborhood?

Byron showed the address to an old Vietnamese man walking down the road, and sure enough, right around the bend was the airbnb home. We walked past the gate and into the home to be greeted by our host, Thuy, and her two daughters.

We were immediately told to take off our muddied boots, but then were invited to dinner with Thuy and her nephew. The food consisted of spring rolls, pork and egg pancake, and vegetables. Simple enough, but we used their drinking ladle as a serving spoon, improperly used our chopsticks, and probably committed a multitude of other dining faux pas.

We chatted with Thuy and her nephew about our different cultures, how not many people learn English, and how apparently low women are respected in comparison to some Western nations–“you very lucky girl to live there”. It was hard to tell when talking to her if we were well-liked or not, since she was direct, but very hospitable nonetheless. Since we had such an outstanding first airbnb experience in Australia, we will forever be comparing to that, with little room to live up to those high standards.

We settled into our room and slept for a long long time, happy to be away from the madness of the streets outside.

Still feeling sick with congestion and a sore throat, I woke up late (which for me is 10am). Eventually we went out to try to finagle some food from the street vendors. The first challenge was simply to cross the street. In all the chaos of motor traffic, there’s never a clear path across, or any traffic lights (the crosswalk is merely for decoration). The trick is to step directly into traffic–head up, steady pace and don’t give a damn, all while scooters whiz around you and buses frantically honk their horns at you. It’s quite fun actually, and you have a genuine sense of accomplishment when you reach the other side unscathed.

We were lucky enough to choose a place that had an English menu and asked for traditional pho. For those that haven’t had pho (pronounced “fuh”), it’s a soup with flat white noodles, pork, veggies, and often lime and peanuts. The warm broth was perfect for our colds, and it came to a whopping 1.87USD, or 40,000 Vietnamese Dong.

We went for a walk up and down the congested street, past fruit vendors, meat vendors (selling the full cooked body of a dog…tail and all…), bread and bakery stalls, mechanic garages and everything in between. The vendors were all selling their wares in the middle of the sidewalk, sometimes encroaching into the road. After seeing the roasted dog, I was a little hesitant to try any meat from the street, but we did buy a few oranges from a man on a bicycle. The fruit here looks disfigured and brown, unlike our waxed-to-perfection fruit back home. However, the fruit tastes incredible inside, which shows how little the cosmetic outside matters.

We went back out once more for dinner after snoozing for a few hours and had fried rice and fried beef noodles at the same restaurant. The rest of the night I just took it easy and tried to recover from being sick.

The wifi at our airbnb home was surprisingly strong enough to skype home, which is always a treat. We had another slow morning and eventually got out for a breakfast of pho and then packed our bags to move over to the Serenity Hotel. Our accommodation for the next five days was located in The Old Quarter, one of the most hectic areas with a clash of old architecture and new markets and speeding scooters and death trap intersections.

Still feeling sick and not up for sightseeing, we strolled around the area, past markets selling shiny red and gold envelopes and decorations for Tet (Lunar New Year), street food, and many clothing stores. This area was much more urban than the first, with even a few western restaurants and shopping options. We ate dinner at an outdoor cafe selling beer for $0.42 and noodle dinner for about $1.40. Of course, there are some trade-offs, as the chopsticks are filthy, the bowl may or may not have been cleaned in the past week, and the meat has questionable origins. All part of the experience!

Our $11 hotel room was on the 6th floor, which left us out of breath by the time we reached the door. However, the room was clean, spacious, and a great refuge from all the noise and chaos on the streets outside. 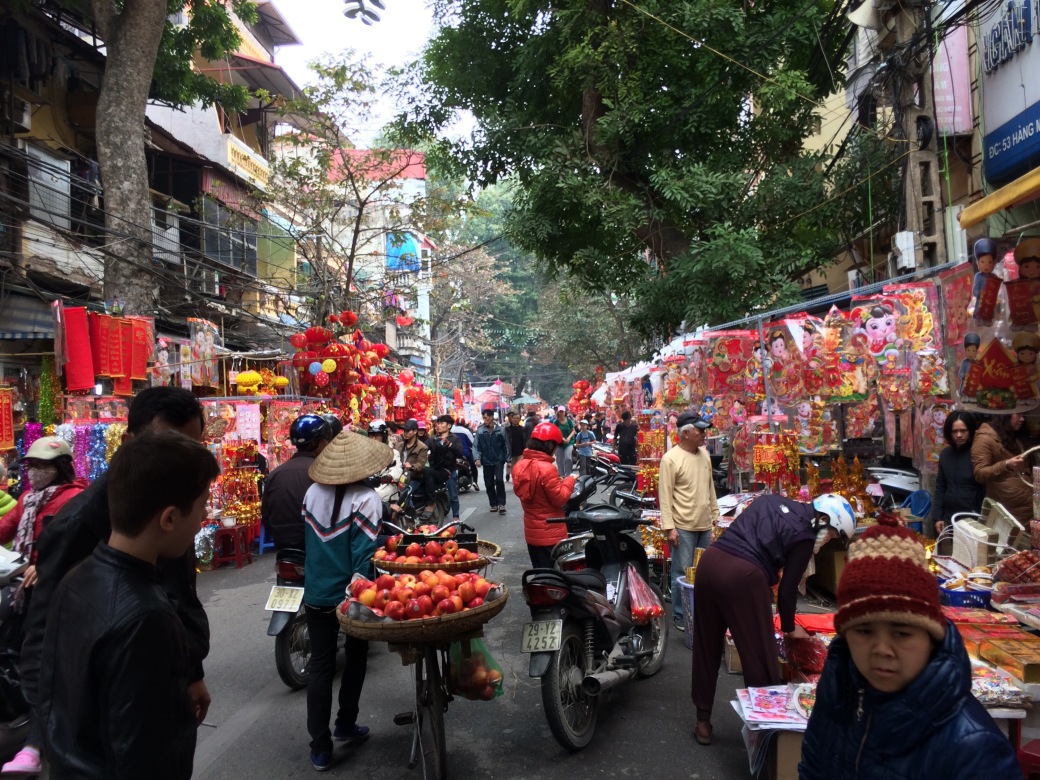