After a miserably sticky, wet, and itchy night, we packed up the soaked tent and tried to reorganize the car. The complimentary waffle breakfast lifted our spirits a bit and soon we were off to The Hostel in the Forest. I thought the GPS had totally messed up when it told me to turn off the main road onto an unmarked pothole-ridden dirt path that winded through the trees. I was so skeptical to see what this hostel was going to be like and prayed that every puddle we hit was shallow. The car crept through the terrible road, and miles later a sign welcomed us saying “Welcome Home”. We walked up to the wooden geo domes that housed the common areas and office and were greeted by an English man named Murray. He probably had no trouble finding us since we had a look of confusion on our faces, and weren’t wearing tie-dye. He took us on a wonderful tour of the property, including a demonstration of the hand-crank composting toilet system and a stop at the staff-built tree houses with handmade stoves and such. Some hippies were out and about as we wandered among the vegetable garden, massage hut and “hot tub”. We talked for a long time with Murray and his handsome rugged woodsman manager. We exited on the same road we entered, and felt as if we had spent the last two hours in a different universe and were just now returning to reality.

Our drive to Charleston, South Carolina was short. No one was at the hostel when we arrived, so we strolled downtown. To be completely honest, I wasn’t too impressed with Charleston and thought it was full of wealthy white people shopping at designer boutique shops. We escaped the shopping and walked along the water. We had made it to the Atlantic Ocean!!! All the way coast to coast. We carried along the waterfront to the Grand Market and found a BBQ restaurant to indulge in pork barbecue and mint juleps.

Back at the hostel we bugged the front desk girl to get ahold of the hostel owner, since we scheduled a meeting with her weeks ago and hadn’t heard anything since.  We took matters into our own hands and knocked on the owner’s door in the back (we knew this was her house since we read her book. I know, full-on creeper status.) Luckily, she opened the door and promised to meet later that night after the baby was asleep. We chatted for an hour or so and it gave us hope that if she were able to do it, maybe we could also write our own.

The hostel offered instant oatmeal, and we had peanut butter in the car, so we made a concoction of both for a protein-filled breakfast. We hit the road and were off to see Poppy and Kenu (my grandparents) in Williamsburg!! We passed through North Carolina and only stopped for delicious Cook Out and a gas fill at South of the Border. For those that haven’t experienced Cook Out, it’s an incredible fast food joint with cheap burgers and the creamiest milkshakes. I was introduced to these first on a road trip with college friends down to South Carolina and have been hooked ever since. Sadly, they only exist in the South.

We drove down the familiar roads of Poppy and Kenu’s neighborhood and were greeted with hugs and gummy worms on our pillows (as tradition calls for). We set up the damp tent in the backyard to dry (probably to the horror of the neighbors) and caught up over wine and espresso coated cheese (also tradition). After we walked Byron through the wall of childhood family photos, we went out to a local favorite called Paul’s and feasted on calamari, great food, and mini cannolis for dessert (as always). Back at the house, we got the tour of the elaborate train set in the den and got to hear about new discoveries to add to our family tree. Poppy and Kenu have done a ton of work tracing back our ancestry and have gotten to the point of identifying several war veterans, including a man that fought in the Revolutionary War. We said our goodnights and slept so soundly in the comfort of a real bed, in a house I’d known for years, happy to have the chance to spend time with my grandparents. 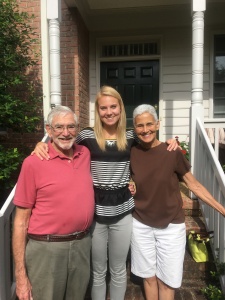 In true family tradition, we indulged in the famous Poppy Breakfast, which comprises of scrambled eggs, english muffins with jam, sausages, and hot coffee. We were stuffed full as we loaded up the car, filled the tires with air and hugged goodbye. We had a busy day ahead of us and we rushed to Washington DC for a meeting with the head of Hostel Development at Hostelling International. On our way, we stopped at the envy of all convenience store owners, Sheetz. This chain is only in the south and offers a premium experience with beautiful bathrooms, delicious food, and consistent customer service. It’s a tobacco rep’s dream and all my coworkers and I wished we had them as our clients.

We felt extremely official as we were presented with badges for entering the massive office building and were escorted to the headquarter doors of Hostelling International USA. We admired the antique memorabilia from the days when the organization went under the YHA title. Soon we were ushered into a large conference room and were given prepared packets with information about the organization. Even though to them we were probably just two young adults who didn’t have anything to offer, the execs gave us over an hour of time and graciously answered all of our questions and gave us wise career advice. We left feeling excited for the future and happy that they took us seriously.

Back on the road to Philly, the highways became dense and began criss crossing through clustered cities and suburbs. Even though I’d lived my whole life navigating the chaotic highways of the eastern seaboard, it was a stark contrast to the wide open rolling freeways of the south. We crested the Benjamin Franklin Bridge and descended into the narrow cobblestoned streets of Philadelphia. After circling the block multiple times and trying to decipher the street cleaning rules on a quest for parking, we decided to say, screw it we’ll park in a garage and be done with it. We dropped off our bags at the hostel and headed out for some beers with Dennis from HostelTrends.com for a long chat about the industry at an irish bar, literally called the Irish Bar.

After our chat, we still hadn’t had dinner, but all the restaurants were starting to close their doors. Luckily, Ishkabibble, a walk-up Philly Cheesesteak stand was still serving up warm delicious sandwiches. We sat on a stoop on the way back to the hostel and enjoyed the gooey cheesy bites while groups of people wandered back from the bars along the cobblestoned streets lined by quaint New England-like brick buildings. Satiated and satisfied with our night, we crawled into our bunks, along with 22 other backpackers sharing the room.

Our tourist time in Philly was limited to a half an hour speed walk to the old town square and a peek at the line snaking around the viewing platform of the liberty bell. The rest of our time was spent getting a tour around the hostel renovation and chatting with the owner of the hostel. We hit the road again, rushing to make it back in time for my orthodontist appointment back in Connecticut, which I’d miraculously scheduled back in San Francisco for the only day and only hour I’d be in Connecticut during business hours. Through Pennsylvania, through Jersey, past the NYC skyline, over the George Washington bridge, past New Rochelle where I dropped Byron off to his dad’s, and onwards to Conroy Orthodontics in Wethersfield, only 4 minutes late. Not bad for coming from over 3,000 miles away .

With a new set of shiny new Invisalign trays in hand, I headed on home to Dad and Chris’ house for dinner with Shan and Dave and the fam. It was so bizarre driving my car with my California plates along the winding local roads of East Hampton, so very far away, as I pulled into the Tavern parking lot. For the next few hours I got to hang out with the old crew of Kyle, Kayla, Brittney, Ben, and Ryan, where we caught up and laughed over beers on the patio. I slept solidly in the comfort of the massive Garagemahal, the recent three-level addition to the house.

My Eggo waffle breakfast tasted like home, especially after realizing it had been over a year since I’d indulged in the fluffy yet crisp morning treat. With a jam-packed day, I was off to my mom’s storage unit early to drop off all the things I had transported with me from San Francisco. About 60 pounds lighter, I drove the car to a quaint cafe in East Haddam called Two Wrasslin Cats to meet with Shannon and Mom, a fitting place for future potential cat ladies. We caught up over sandwiches and coffees for a few hours, until Shan and I left to go off to my aunt’s house. It was a good feeling being able to say goodbye to my mom knowing that I was going to see her in two weeks after flying back from the West Coast when the road trip was over.

The sun was shining bright as we cruised around the lake in my uncle’s boat, spending time chatting with my aunts about the trip and future plans. I’m grateful for the fact that my family has been completely supportive on the whole quitting my job thing, and are pretty open to me following my passions wherever in the world it takes me. I know not everyone has that luxury. 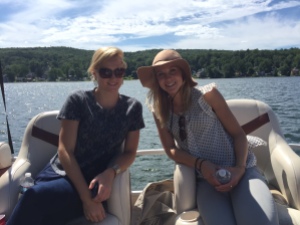 Again, I said my goodbyes knowing I could see them again soon, and then drove to West Hartford to meet up with Kayla to celebrate her birthday. I had some time beforehand, so I opened up my work computer for their first time on the trip and weeded through the flood of emails. It felt great knowing I only had to deal with these emails for a few more days before I never had to think about tobacco or sales again. At World of Beer, Kayla, Natalie and I gossiped and caught up until I left to spend the night in Madison.