Our first task for the day was to take the bikes to a mechanic to make sure they wouldn’t break down the minute we left the city. Up to this point, Byron had been doing all the driving, so this morning, in the pouring rain and crazy traffic, was my first time driving in Vietnam. Luckily I got the hang of it, causing only a few traffic jams in the middle of intersections, and we made it to the garage. We left the bikes in the trusty hands of the Vietnamese mechanics and decided to celebrate Valentine’s Day with a massage.

In Vietnam, there’s an endless supply of cheap massage parlors, all ranging in cleanliness and reputation. We chose Ms. Dzung’s Massages because she is a blind woman that learned the art of massage and then employed other blind people to learn her technique. Not only did we feel good supporting her business, but it was also a very judgement-free place since the people that are massaging you can’t even see you. I selected the cinnamon aromatherapy massage and it was heavenly. I’ve never gotten a professional massage before, so I hope they are all this good. The only downside was when the grating sounds of the highway outside snuck into our peaceful haven, interrupting my zen with sharp horn blasts and scratchy bull horn announcements. I tried to savor every moment in the hopes of trying to channel this peace and relaxation later on when I had to re-enter the madness outside.

Relaxed and pain-free, we enjoyed shrimp fried rice in a clean restaurant near our hotel, which offered individually wrapped chopsticks. They were even playing the Grammys on TV, so we got to stay up to date on the drama Kanye caused for getting up on stage again.

I’m not too overly romantic or anything, but I decided that Valentine’s Day deserved some cake and white wine. Byron, who opposes the commercial aspect of Valentine’s Day and doesn’t believe in the holiday much at all, did not want to partake. So, I bought myself a small cake and my own bottle of wine to celebrate the holiday. ❤️

We had big aspirations to wake up early to go see Ho Chi Minh’s Mausoleum, which is similar to Lenin’s Tomb in Moscow where an old dead man really wanted the world to see his dead body preserved for decades in layers and layers of formaldehyde. Unfortunately, we had run out of clean clothes and needed desperately to do laundry, and you’re not allowed to enter the mausoleum unless you’re wearing full-length pants. I doubt Ho Chi Minh would have minded much considering his status of being dead and all, but we changed our plans and walked around the Hoan Kiem Lake instead. Our wandering took us to the Hoa Lo prison, which was originally a village known for its pottery work, until the French colonizers came in, destroyed the village and took over the area for their prison. We saw the cells inside that held countless Vietnamese revolutionaries, who fought against the French rule and for the ideologies of communism. There was even a guillotine on display to accompany the horrifying stories of torture and mistreatment. This jail also served as a place to hold American POWs during the Vietnam War (they call it the American War). We saw McCain’s flight suit he was wearing the day his plane was shot down. The most amazing part to me was how well it seemed the American POWs were treated here, according to the pictures of American pilots hanging out playing basketball, smoking cigarettes, and celebrating Christmas. There could be a touch of Vietnamese propaganda, but I had my doubts that the Americans were treating the Northern Vietnamese POWs this well.

After the jail, we met up with our Semester at Sea friend, Jessie, and the girls she was traveling with for lunch. We tried to give advice based on the few days that we’d been in Hanoi and took them to the Lunar New Year (Tet) Market to take in the all the excitement.

Luckily, our bikes were ready to be picked up from the mechanic and we were soon riding them around with the assuring words of the owner who said our engines were “somewhat fixed”. Just in case “somewhat fixed” wasn’t good enough, we went to Hue Street to gear up with full-face helmets, gloves, rain pants, locks and bungee cords.

On the way back to the hotel, Byron’s bike puttered to a stop at a red light and refused to come back to life. Sure enough, the bike was completely out of gas and we were on the edge of a park with no gas station in sight. At that moment, a little Vietnamese woman came over to us with a funnel and a sketchy plastic bottle of green fluid. We had some serious doubts that this woman was actually selling gasoline, so Byron walked to the closest mechanic and asked them if they sold gasoline. The mechanic pointed over to the woman in the park. If the mechanic trusted the random woman in the park for gasoline, it was good enough for us, so we paid her a few dollars and she poured the mysterious liquid into the tank. Problem solved.

We tried starting it up again and noticed a constant stream of gasoline pouring out of the bike. We looked around not knowing what to do, and a Vietnamese man came up to us, pointed to the bike, got out a small hammer, and started whacking at part of the gas tank. Sure enough, that did the trick and the leak stopped. If only every time we had bike issues, there would be a random Vietnamese there to help us on our way.

Later on, we met back up with Jessie and friends for dinner and a showing of the traditional Water Puppet performance. The show occurred in an indoor theater, with a stage of water and a house band on stage right. They played music while puppets came out and performed little skits in the water. Definitely a unique experience and I’m glad I saw it once, but I can’t say I’d need to see it again.

After the show, we munched on chocolate filled buns, wandered the night market, and stayed up late chatting at their hotel until we had to say goodbye. It was weird to think this was the last time we were going to meet up with people we already knew during our travels since the Semester at Sea ship was leaving Vietnam the next day. 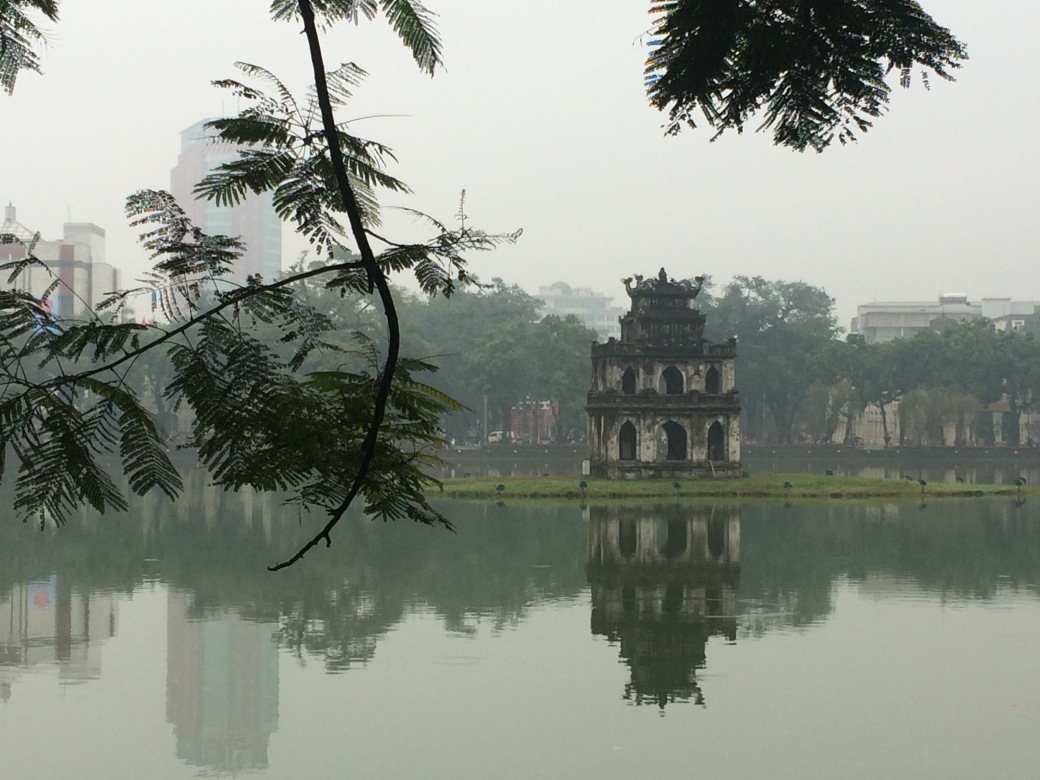