We arrived at the Wicked Camper rental office with confused looks. We were supposed to be picking up our car today, and all we could see at the given address was an abandoned lot of beat up looking cars. At one end of the lot was a shipping container, and to our surprise there was a woman and a desk and a computer inside telling us we were at the right place. She showed us to our car, which would be our kitchen, bedroom, living room, and primarily transportation for the next five days as we traveled along the coast from Adelaide to Melbourne. While we were there, a couple returning their car showed us the massive dent they got after hitting a kangaroo, which made me anxiously scan the side of the road the whole trip.

Our car was a Toyota Corolla hatchback, custom made with the back seats removed and a “bed” installed made out of plywood and thin patio furniture cushions.

I put Byron in charge of driving most of the time and I was co-pilot since the thought of driving on the left was a bit intimidating (I tried it for a bit one day and that was enough for me).

Our first stop was the Mclaren Vale Wine region, famous for producing some of Australia’s finest wines. Once we entered the region, hundreds of grape vines sprawled to either side of the road in organized rows. There were different vineyards every hundred yards, making it hard to choose which one to stop in and do a tasting, so we just drove around the windy steep hills and stopped at the Chapel Hill Vineyard at the top of the hill with views of all the surrounding valleys of vines.

We heard there was a picnic spot for us to eat our grocery store chicken, and we’re expecting a moldy old picnic table somewhere in the parking lot. We were astounding when they ushered us right outside to a patch underneath a giant oak tree, just feet away from the rows of vines, and provided us with a plush picnic blanket and $6 glasses of wine (made from the grapes right in front of me!) I couldn’t be happier as I took in the incredible view and sipped the delicious Chardonnay.

After one of the most memorable lunches I’ve had, we continued on our way. We got lost (easy to do when your surroundings are all grape vines), but ended up at the Paxton Vineyard, where we had a generous “tasting” and purchased a few bottles to take with us. Our next vineyard stop was Hugh Hamilton, known for his black sheep branding. We enjoyed more tastings while our server told us intimate details about exactly what wine “Hugh” was sipping right this moment. The view was great in the gazebo-styled building giving us a 360 degree view of their crops.

We decided we’d had enough of the vineyards and drove to Victor Harbor on the Fluerieu Peninsula. The harbor was beautiful and looked similar to harbors in Maine, with evergreens lining the beach and little fishing boats bobbing in the water. The main attraction was the long wooden bridge connecting the harbor to Granite Island where a horse drawn tram pulled tourists across. We chose to save the horse the burden and walk ourselves across the bridge and do a trail around the entire windy, boulder-littered island.

For our first meal in the car, we bought kangaroo steak and potatoes to grill on the free public barbecues that Australia provides in parks. We met other people planning on spending the night in their cars at the park because they were escaping the bushfires that were ravishing homes in the surrounding area. We washed our faces and brushed our teeth in the public bathrooms, set up our flimsy bed, closed the car doors and tried to sleep. 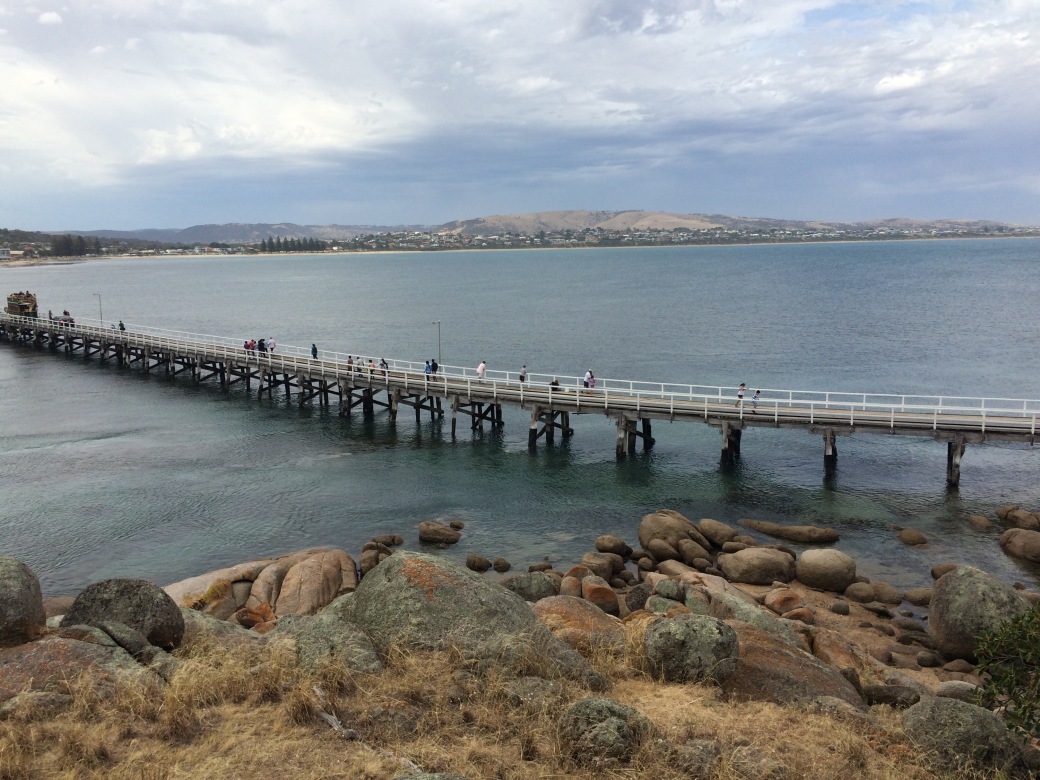