Our morning train to Jodhpur took us past field after field of dry brown grass and desert. For some odd reason we also passed a significant number of people taking their morning poop in the ditch by the side of the train tracks. No jokes, we witnessed at least forty people squatting right in plain view for all of us on the train to see. The reason I mention this is because it is a phenomenon that I could never imagine happening in the United States.

The Heaven Guest house in Jodhpur was operated by a single family who was quite insistent with their hospitality. The moment we walked through the door, the mother said, “Come, sit. You must talk with us,” while she forced a piece of the family’s bread into our hands.
The guesthouse had an incredible view of the Mehrangarh fort, which spanned an entire cliffside towering 120m above the jumbled old city below. The clay and cement structures that make up the old city are mostly painted a light shade of blue, originally to indicate religious status, but now it’s more just for looks. The effect is a vibrant sea of blue underneath the deep brown sandstone fort.

It was midday and the sun was directly overhead, which is when most people give up on daily activities and just stay inside. However, we wanted to see a bit of the city, so we wandered around the winding streets to the centrally located Sardar Market. Rickshaws screeched around corners, women sat under umbrellas selling pashmina scarves, men hauled scraps of metal away to be sold, and a clock tower stood perfectly motionless in the middle of all the activity. We paid a few cents and climbed to the top of the clock tower for an excellent aerial view of the market mayhem. An enthusiastic employee showed us each bit of the mechanical clock, and insisted on taking photos of every minute detail. It was heart warming how passionate he was about showing us his work.

We took a lap around the bazaar to gaze at what was for sale and we were stopped several times by men urging us to visit their tailor shop. Each one said, “Oh, you’re from America? You know, Richard Gere and Bill Murray made a special visit to Jodhpur, and they buy from my store. I have picture, you come see!” Unless Richard Gere left with an entire closet full of suits, someone had to be lying.
The heat became unbearable, so we rested at the guesthouse and ventured back out for dinner once the sun went down and the air was breathable again. We dined at a rooftop restaurant with an even better view of the fort, now illuminated by several spotlights that created an orangey glow against the darkening blue sky. It was absolutely stunning and instilled a feeling of comfort and awe while looking up at that great big fort. Our food came out at hour later, but that didn’t matter to us since we were having great conversation with one of the prettiest night backdrops. 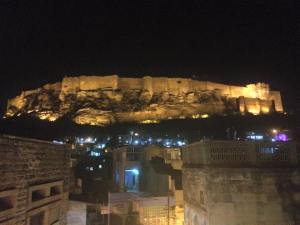 Apr 16
Some people choose to visit the fort by listening to a recorded audio guide while shuffling from wall to wall. We were up for a bit more adventure than that and had a 9am booking to see the fort by whizzing past it on a zip line.
I thought 9am was early enough to beat the sun’s frying rays, but as soon as we hiked up the steep maze of crooked unmarked paths to the fort, I knew I was wrong. The zip line office was located inside the fort’s elaborate garden, which served as a nice area to practice the technique of leaning back and hanging on for dear life on their beginner zip line. We were joined by a fun group of four British girls and two Australians, making our experience much more entertaining. After mastering the practice line, we waddled over in our harnesses to a high turret on the fort that had a line extending from our side all the way across a deep valley to an anchor on the other side. We took turns experiencing the thrilling sensation of speeding along the cable while the beautiful blue buildings of the city whizzed past. We all survived and were ready for more.
The next cable was strung high above a green lake with turtles and fish barely visible from our height. One of the guides pointed to a giant stone pit in the earth next to the fort and informed us that this was where the a prison from Batman was shot.
I pushed off the platform and soon I neared the orange fort wall and had to use my glove on the line to brake for a smooth landing. I could do this all day! Sadly there were only six lines of thrilling adrenaline rush, but we had some added entertainment on the last line as one of the Australians ripped the seat of her cloth pants and deeply regretted not wearing underwear that day. She was a good sport and we parted ways laughing.
Back at the guest house, we were resting in our room when a huge amount of noise sounded like it was coming our way. The streets of India are always noisy, but this was the sound of instruments, blasting base beats and cheering. I looked out the window and was stunned to see a painted elephant trotted past with an entire marching band following it. We rushed down the stairs and out to the street to figure out what was going on. Still without answers, more people marched past us and tractors groaned past as they hauled trailers with people dressed up as the Hindu gods with elaborate make up and costumes. We followed the parade for blocks as the people on the floats waved to us and offered handshakes. Men dressed in turbans were playing the flute for Cobras while children were dancing and women smiled coyly from behind their sequined veils while sitting atop car roofs. We snapped pictures and tried to make our way to the front of the parade while getting pulled into random dance parties on the street every hundred meters. It was wild and I didn’t understand anything that was going on, but it all felt so very Indian. To be unexpectedly caught in the middle of a joyous local celebration was an experience I’ll treasure.
Apr 17
Our breakfast options were omelettes from one stall, or omelettes from the stall across the street. The rivalry goes back for years according to our guidebook:

Omelette ̈Stalls ̈ CAFE $ (Sardar Market) On your right and left as you leave Sadar Market through its northern gate, these two omelette stalls compete for the attentions of passing travellers by knock- ing up seemingly endless numbers and va- rieties of delicious omelettes. Some folks swear that Omelette ̈ Shop (omelettes from ₹25; h 10am-10pm) is the better of two. Oth- ers wouldn’t dream of going anywhere but Vicky ̈ Chouhan ̈ Omelettes (omelettes from ₹20; h 8.30am-8pm). In truth, they both do a decent job, and are both run by characters worth spending a few minutes with.

We chose Vicky and did not regret our decision one bit. The owner truly was a character and insisted we read every review he’s ever gotten in his ratty notebook, and then tried to sell us tailored goods from his shop while we munched on our savory eggs.
We walked back up to the fort to get a different view than from the zip line. The perimeter of the fort gave incredible glimpses of the entire city, the height accentuating the sea of blue even more. Jodhpur doesn’t have any skyscrapers, or buildings much over three stories for that matter, which permitted our view to extend for miles and miles.
After packing up our things and checking out, we escaped the 108 degree weather at an air-conditioned restaurant. I ordered the Italian pizza and was pleasantly surprised when it came out with spaghetti noodles on top. A few hours later we hopped in a tuk tuk to the railway station and awaited our delayed train. We arrived at our next destination of Jaisalmer after midnight and went straight to bed. 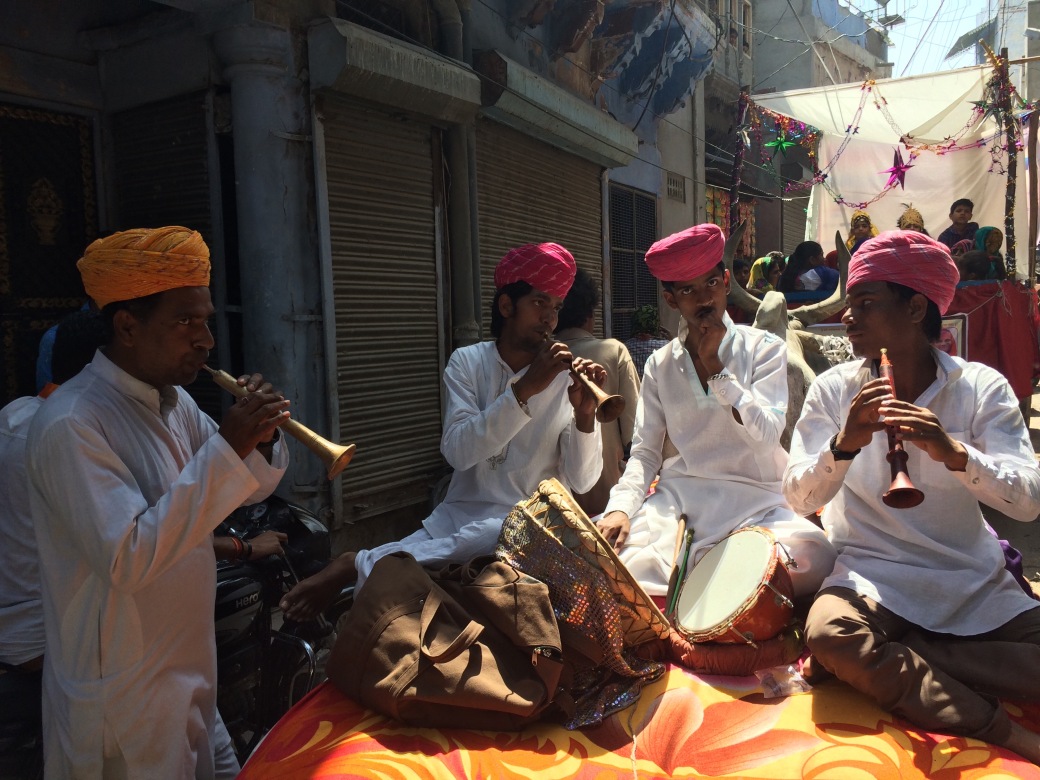